The Week of Prayer for Christian Unity was first observed in Australia in the early 1950s by the students of St Michael’s House at Crafers, S.A. and Ormond College in Melbourne, Vic. achat viagra naturel.

This was the result of the enthusiasm of Fr Gabriel Hebert, S.S.M. and Professor Davis McCaughey who had shared in such prayer in Europe.

The observance of a Week of Prayer for Unity was originally proposed in 1908 and held in January each year. However its intention was the reunion of Christendom with the Roman Catholic Church.

A French Catholic priest, the Abbé Paul Couturier who had worked with large numbers of Russian refugees in the 1920s realized that they, as members of the Orthodox Church, could not share in prayers for that particular scheme of unity.

As a result he suggested that we should pray for the unity of all Christians according to the will of Christ and by the means which he chooses. This is a prayer in which all Christians are able to share.

He worked tirelessly to promote better understanding between Christians of different traditions and for the week of prayer for Christian Unity up till the time of his death in 1953.

This was the Week of Prayer which was brought to Australia, but since January was not a good month in which  to promote such an observance it was decided to hold it in the period between Ascension and Whitsunday.

This is a most appropriate time, especially as the Gospel for the Sunday after the Ascension includes Jesus’ prayer to the Father for his Church: “…that they may be one, as we are one.” 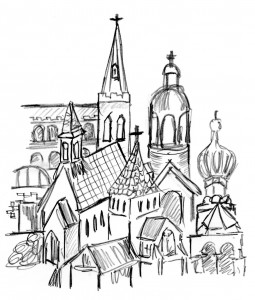 ‘The walls of separation do not rise as far as heaven.’
—Metropolitan Platon Gorodetsky (1803-1891) of Kiev.

Daily Prayer of the Chemin Neuf (New Way) Community, based on Couturier:

Lord Jesus, who prayed that we might all be one,
we pray to You for the unity of Christians,
according to Your will, according to Your means.
May Your Spirit enable us to experience the suffering caused by division,
to see our sin,and to hope beyond all hope. Amen.

The Strathalbyn branch of the Mothers’ Union continues to meet regularly and the members celebrated their 117th birthday on Tuesday 12th May with a service of Holy Communion in Christ Church when new members Barbara Wilson and Patricia Mold were welcomed. They then enjoyed afternoon tea in Jocelyn Williamson’s garden at Meadows.