Many thanks to you all for your great support throughout the year. Together we have been able to touch many lives with God’s heart of love. Your generous spirit of giving has enabled me to support families with volunteering, meals, hampers, vouchers, furniture, a staff lunch, a Christian Option program and the list goes on.

The family we were helping with furniture now have beds and bedding, wardrobes, lounge, washing machine, kitchen table and chairs, crockery, cutlery, pots and pans – and even an offer of bikes for the children. It was great to receive so many phone calls offering help. The Mum, Judith, asked me to please pass on her very sincere thanks to all the churches.

Thank you for all your help with the catering day where we provided morning tea and lunch for all Eastern Fleurieu staff (120) at their recent Professional Development Day. This was such a beautiful way to bless the staff.

Our Christmas Christian Option Program was a great day with a very high percentage of children attending.
The meals we have provided have been such a great way to support a families in need. A text from one such mum to me said ” Thanks for your help to myself and my young family. We appreciated everything you do for us, you  are amazing with a beautiful heart.”

Folks I couldn’t do this work with out all you do standing along side of me. Praise God how love and grace touches lives.
May your Christmas be filled with God’s love, peace , hope and joy.
God bless,
Kaye Gale (Pastoral Care Worker). 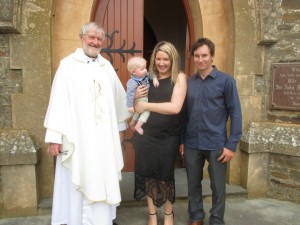 The Second Sunday in Advent: 6 December 2015

The usual morning congregation at the Holy Communion Service at Christ Church also welcomed through Baptism seven month old Seth James from Langhorne Creek as “a member of Christ, the child of God and an inheritor of the Kingdom of Heaven.”

Father David Smith and the congregation welcomed Seth’s Mum and Dad, Kristy and Damien with his little sister Maisy. God-Parents were Amy and Christopher Nelson, and Lochlan Milne.

Kristy’s Mother and Father, Mr and Mrs Tucker had been married in Christ Church, and were happy to join in the celebration of their grandson’s Baptism in the Church that had so many memories for them. There were many other family connections and memories shared with the congregation, with Kristy having also been presented for confirmation in Christ Church by Fr. Alex Bainton some years ago.

Representatives of the Mother’s Union, President Eileen Smith and Jean Merchant presented the newly baptized Seth and his four year old sister, with knitted figures as keepsakes as well as certificates for the parents and God-Parents, together with a Baptismal candle.

At the end of the Service, refreshments were served in the Hall and many reunions were recalled and discussed.At the end of this Service a retiring collection was also undertaken for the victims of the SA Pinery Bushfire Disaster, and with more donations still to come in Fr. David announced that so far $240 has been collected, with the Appeal continuing into next weekend.

The Baptism family presented a delightful prayer memento to everyone in the congregation, which is copied here, together with a little gift for all.

A delightful occasion for all to share, and the ‘Prayer for Seth’ summed up the thoughts and prayers of everyone at the Service.