There were once three Aussie shearers, Ratso, Big Bob and Bungo who as you would expect had the usual border collies to help them round up the sheep, called Brute, Tiny and Fang. Then one day their whole world was turned upside down with the arrival of a new shearer called Shaun who didn't have a sheep-dog but instead a sheep-sheep called Pete! 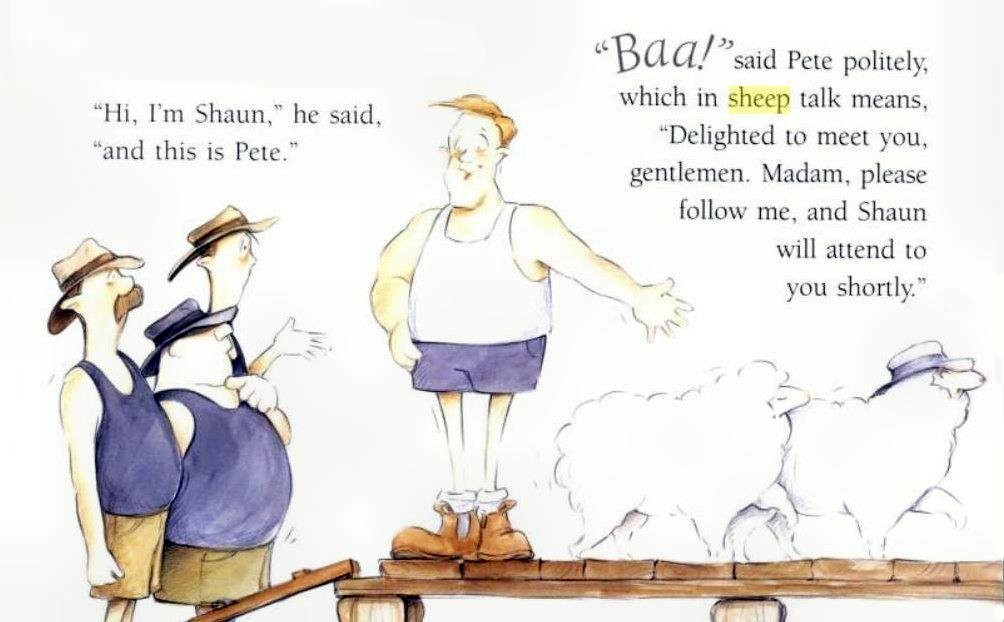 And so starts a delightful children's picture book written by Jackie French and illustrated by Bruce Whatley. This is a whimsical story which draws on the folk memories of the time when Australia's prosperity rode on the back of our pastoral industry and immense flocks of merino sheep. One has to wonder, though, how much longer the majority of Australians can be expected to know anything about this colourful aspect of our country's life and history.

Similarly the history of the Jewish people went back to their pastoral ancestors, like Abraham, who possibly belonged to one of the groups of wandering herdsmen known as the Habiru, or the “dusty ones”.

The Bible is filled with the imagery of pastoral activities. In particular the role of the shepherd is used as a model for the ideal king in Israel, no doubt strengthened by David's background as a shepherd. God's relationship with his people is also compared to the way a shepherd cares for his sheep.

For many people one of the greatest descriptions of the Lord who is our shepherd is found in this morning's psalm, Psalm 23, although the pastoral theme is interrupted in verse 5. It describes the way God cares for his people, providing them with all the necessities of life, guiding their steps and protecting them in times of danger. It then concludes with one of the most remarkable passages you are ever likely to come across. “Surely your goodness and faithfulness will pursue me all my days...” The verb used here is normally used of being chased or hunted down by an enemy with evil intent, but here it describes the way in which God, in his goodness and steadfast love, chases after us for good.

Of course that is just what we are celebrating in this Easter season. That God sent his Son to track us down and call us to him, to give his life for us and to provide us with the gate by which we might enter into the Kingdom of Heaven. Everyone is familiar with the pastoral imagery with which this salvation is clothed, but you have to say that it is hard to keep up with the changes of the metaphors which are used and the implications which some of them have for our understanding.

Just look at this verse from Revelation describing the joy of the blessed ones as they stand around the heavenly throne and perhaps echoing Psalm 23. “For the lamb in the center of the throne will be their shepherd. He will lead them to springs filled with the water of life, and God will wipe every tear from their eyes." Rev 7:17 And now in this morning's Gospel we are confronted with yet another metaphor — or is it?

We start off with the shepherd of the sheep, who is recognized by the gatekeeper and enters by the gate, not over the back fence. The shepherd calls his sheep by name and they follow him so that he can lead them out to pasture. Good! We can understand that, although in Australia we think of sheep being herded not led.

However, we then come to the key words in this passage, supposedly making clear what his listeners had so far not understood! “Amen, amen, I say to you, I am the door for the sheep.”

So is Jesus the shepherd who enters by the door, or is he the door? Were there really no prophets or leaders of Israel before him who truly cared for the sheep? Were they all thieves and bandits? In contrast to such figures Jesus, the door of the sheep, enables the sheep to come and go and find pasture.

You remember that in all the gospels Jesus prefixes some particularly significant saying with the familiar Hebrew word Amen, which has the basic meaning of solid, firm or sure (nothing to do with the verb “to be”) and in John's Gospel he uses a double Amen on twenty-five occasions, two of which occur in today's Gospel in verses 1 and 7, (translated by the NRSV as “Very truly” which doesn't have the same kind of ring as “Surely, surely”). So why has Jesus used these words in this instance? He doesn't use them in verse 11 when he says “I am the good shepherd” so why here?

Before I try to answer that I had better go back to my previous question. How can Jesus be both the shepherd and the door? The suggestion is that the Middle Eastern sheepfold even up to recent times had a gateway in its wall but no gate. As one shepherd put it, “After my sheep are in the pen, I lay my body across the opening. No sheep will step over me and no wolf can get in without getting past me first. I am the gate.” Apparently there is no contradiction after all. The shepherd himself is the gate.

Therefore not only does Jesus, our Good Shepherd, lead us and guide us and protect us and comfort us, he also opens the way which leads from the fold of this world into the pastures of the Kingdom of Heaven. He has been able to do this because he was not just the Good Shepherd, he was also the Lamb of God who by his death on the cross takes away the sins of the world, and thus he became the door to eternal life. That is why Jesus has emphasized that he is the door for the sheep. Through him we are able to enter on to the Way which leads to the Father.

As a result we look forward in hope to raising our voices in the heavenly choir, singing, "To the one seated on the throne and to the Lamb be praise, honour, glory, and power forever and ever!" Rev 5: 13

However, in the meantime the flock which Jesus came to save is still in need of guidance and protection, help and comfort; and this morning we prayed to God to “send us as shepherds to rescue the lost, to heal the injured and to feed one another with understanding” I hope that we don't do this in a spirit of superiority as if we are so much greater than those whom we seek to serve. Remember, that Jesus, the great Shepherd of the sheep became the lamb of God for our sakes.

What a great responsibility a bishop has when he or she takes up the shepherd's crook as a badge of office. Fancy trying to walk in the footsteps of the Good Shepherd! I am not sure that I am even one of the sheepdogs like Brute or Fang. I rather fancy being like Pete the Sheep-Sheep having the privilege of helping a fellow creature after being allowed to enter the sheepfold through Jesus, the door for the sheep.

« Sharing the Living Water Paul before the Areopagus »