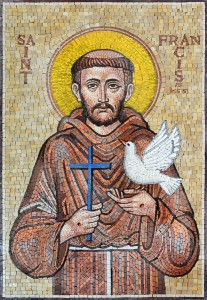 Years before I became a Third Order Franciscan I was studying fulltime for a Bible and Ministry Diploma. I expressed one day that St Francis of Assisi was one of my heroes and one of the lecturers exclaimed: “what! Assisi? That madman?!” His contempt was rather obvious in the way he spat out the word ‘Assisi’ rather than use Francis’ name. He made it quite clear that for him Francis was just a crazy person, abusing his body in misguided penance who didn’t know the scriptures or preach the gospel in truth, and as for the stigmata… ( I do get the uncomfortable feeling sometimes that there are people who believe that there were no real Christians between 300 AD and the Reformation…)

Then I recorded the Zefferelli movie recently, ‘Brother Sun, Sister Moon’ which had some very beautiful moments but made me think again how, like the lecturer, they have missed the very essence of who Br Francis was and why he took the path he did. There are some lovely scenes in this movie of Francis and his ‘poor little brothers’ laughing together, even in their hunger and cold and deprivation, and it captured well their love for each other that bound them together. It seemed, uncomfortably to me however, to avoid any focus on the one person who was the very centre and the very reason for that love – Jesus Christ, whom Francis loved with a total abandonment and passion. This was also obvious in the changing of the words of the canticle Brother Sun, Sister Moon which is the theme song. While one can understand the commercial reasons for this I again thought how this image of Francis gives people the impression that Francis was a tree-hugging, dancing/singing nature lover who had a vague religious attachment along the way!

As I have read more and more about Br Francis I have been struck by his total Christ-centeredness and, although passionate, eccentric and determined in his individual following of the gospel, he was always ‘orthodox’ in his Christian faith and in his respect and support for the Church.

Francis did realise in later years that the abuse of his body in actual fact was counter-productive in his work for the Lord and yes, Francis was suspicious of books and too much learning but this was because he wanted to get out there and live the Gospel not spend his life reading and studying it. Francis longed for the contemplative life acheter viagra 10 pilules. He ultimately brought this to God and was told by our Lord that he must continue to actively preach the Gospel. He wandered the towns preaching Jesus and his passion was so great that both rich and poor encountered the living Christ and desired to follow Jesus in the example of Francis. One of the things that touched me deeply in my journey to becoming a Franciscan (while on retreat in a Syrian Monastery) was the encounter between Francis and the Sultan during one of the Crusades. In fearlessly preaching the gospel of Christ, with a love and respect that greatly impressed the Sultan, Francis witnessed to the love, grace and beauty of Christ amidst an atmosphere of war, desecration and hatred. 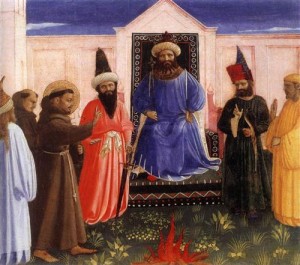 “Francis and the Sultan” by Fra Angelico

Francis was totally Christ centred, passionately in love with Jesus, living humbly and in poverty, without greed or desire for power or status. In this, of course, he imitated our Lord Jesus who, possessing the heart of God himself, was the ultimate example to us of walking the path of humility, love and joy.

Our Br. Francis desired above all in his life to make Christ known, loved and adored. In this he inspired all those around him.