From 1880 until 1895 the Rev’d W. J. Bussell was the Incumbent of Strathalbyn, Meadows and Macclesfield. He was educated in Adelaide but was a member of the pioneering Western Australian Bussell family. His father, Joseph Vernon Bussell, aged only 16, and three of his uncles had arrived in Fremantle on the 12 March 1830. Other members of the family would arrive in 1833 and 1834, including his grandmother, Frances Louisa Bussell.

His grandfather was the Rev’d William Marchant Bussell (1767-1820) who after graduating B.A. at Alban Hall (since amalgamated with Merton College), Oxford he was made a deacon in 1791 and ordained priest in 1792. Most of his ministry was served at St Mary’s, Portsea in Hampshire, but when he died there in 1820 his wife was left with nine children under the age of eighteen.

Ten years later the move to Western Australia was made to build a better future for the family and today there are many indications around Bussellton and Margaret River to remind us of their success.

Joseph Vernon Bussell (b. 1813) married Mary Elizabeth Phillips on 9 February 1853 at Albany W.A. and William John, their eldest child was born at “Reinscourt”, the family property on 23 August 1854. Unfortunately Joseph died in 1860 and his widow subsequently settled in Adelaide with her three young children.

Here Bussell was educated at the Collegiate School of St Peter in 1866-73, remaining for a further three years as assistant to the headmaster, Canon G. H. Farr  while preparing for holy orders. He was ordained deacon in 1877 and priest in 1879 and, after a curacy at Mount Gambier, was successively mission curate in the south-east until 1880; incumbent of Strathalbyn, Meadows and Macclesfield in 1880-95 and priest-in-charge of the River Murray mission in 1894-1912. He was organizing chaplain of the Bishop’s Home Mission Society in 1903-23; canon of Adelaide in 1906 until his retirement in 1933; archdeacon of the Broughton from 1903 and chaplain of hospitals from 1925. T.T. Reed in the Australian Dictionary of Biography

The Rectory was built for William Bussell in 1884 and cost £450. He is shown sitting in his trap, perhaps about to go off on one of his many trips. His mother and sister, who cared for him, are standing on the verandah. Nancy Gemmell, “Old Strathalbyn” 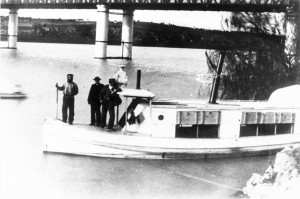 Essentially a missionary priest, Bussell did his most notable work in ministering to the River Murray settlers from 1891, when the Home Mission Society purchased the steam launch “Etona” (pictured left). He travelled on it from Goolwa to the Victorian border, providing pastoral care for stations, farms, and camps of woodcutters and fishermen; from 1893 he also ministered to participants in a group-settlement scheme optimistically established by the government to alleviate unemployment—these settlers, untrained for rural life and almost penniless, suffered great hardship.

Except for the years 1892-93 spent at Strathalbyn, Bussell worked continually for the River Murray mission until it closed in 1913, bringing both spiritual ministration and material help and receiving in return wood for the launch’s engines and occasionally vegetables and fish.

By 1897 the launch, which two years later was replaced by a paddle-steamer with a chapel and deck-accommodation, was travelling 1000 miles (1609 km) every six weeks, calling at some forty places, including the Aboriginal settlement at Point McLeay.

Bussell shared the work with his engineer, John McLellan: he steered and cooked, McLellan stoked and tended the engine; both loaded tons of wood. Outlying places, away from the river, were visited in borrowed buggies, on horseback, by bicycle or on foot, and services were held in widely assorted premises.

One Reply to “The Rev’d William John Bussell”